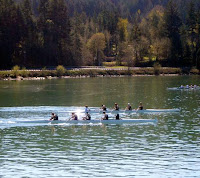 Last weekend we took a motorcycle ride to nearby Dexter Lake and watched the Covered Bridge Regatta -- racing shells from schools and universities all over the Pacific Northwest. The day was a warm 74° and everyone was in T-shirts, shorts and flip-flops. Lots of other motorcyclists were out enjoying the countryside, as well as picnickers, boaters, hikers, etc. We marveled at how the most perfect weekend was set on the calendar at least a year in advance.

While in town on errands one day, I snapped this photo of tulips bursting forth. It must finally be Spring!

Of course it rained a couple of days this week, but not before Mike mounted his 'other' motorized vehicle, a riding mower. After thorough comparisons, we decided that a mower would suit our needs better than a small tractor at this point. And we got a cart to pull along behind it, but we haven't tried that yet. 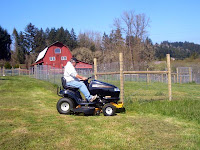 Mike took it slow through the pastures, getting acquainted with the drivability over basketball-sized lumps of grass and along folds in the land, stopping ever so often to remove rocks or branches or whatever. A few of our pastures are too sloped to mow this way, so we'll figure out another method. Once all of the alpacas are here, they'll keep it trimmed down, but until then, we need to tackle it.

And then the weather did a major switchback to Winter: this weekend we awakened to snow both mornings!! The girls are smart enough to go under the shelter or in the barn to sleep; however, the two boys toughed it out in their pasture. The alpacas seemed to wonder who took all the green grass, but once the temperature warmed up, and the snow quickly melted away. 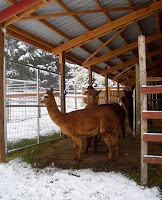 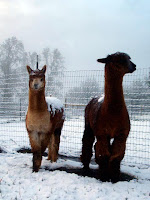 Orion has never seen snow before, whereas Galileo is an old hand at it. When Orion stood up, he seemed to be contemplating the new landscape, wondering if he should step on it. I encouraged them into the shed with a small bowl of pellets (they usually get them in the evenings), and brushed the 2 inched of white stuff off of Orion's back. I am still getting used to how sturdy the alpacas are, and how adept they are to weather that seems so odd to me. I've never lived in snowy regions before either. 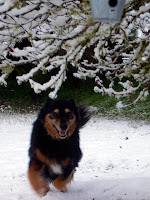 Kelly-dog didn't seem to mind the snow at all.

So, if April showers bring May flowers, what do April snow-showers bring?
Posted by Ann Dockendorf at 11:45 AM 1 comment: 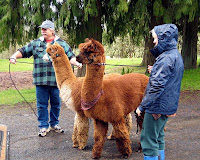 A few decades ago when I was in college, we'd yell "Man on the floor!" in the girls' dorm on the rare occasions when a male was carrying luggage up to a room. But when our two herdsires arrived, no one had to tell the other alpacas that they were there. The dams immediately ran over to the fence to greet them -- "Look, more of our kind!"

Due to bad weather across the Rockies and the resulting backtracking to take another route west, Galileo had been on the transport trailer for a week. Orion had a shorter tour, but both were glad to see open spaces, green grass, and girls.

The two males have similar temperaments and get along well. They engaged in one 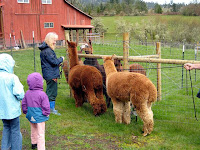 king-of-the-mountain fight, and I separated them for a time. Orion resorts to spitting at his buddy, but he was wearing more green stuff on his mouth than Galileo was on his fleece. Orion is younger and has some catching up to do in the dignity department. 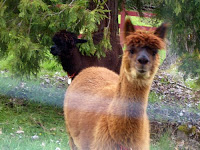 The dams are all pregnant, so there's no interest there. We're expecting two births in May, and the boys will each have a date after that.

Summer (peeking at me through the office window) is Galileo's half sister, and I've wondered if she and Lace remember him. They are often together fence-side, as if to say hello to a former acquaintance from the same farm.
Posted by Ann Dockendorf at 7:07 AM No comments: