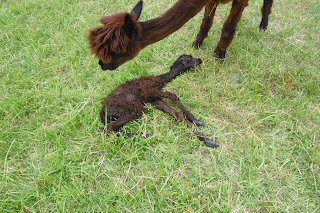 Cria #3 (of the June set) arrived last Thursday morning, another flawless birth in the field by Windancer on day 354 of gestation (first photo at 5 minutes old). And another dark brown cria with black points, this time a male.

Galileo is the sire, and this was obviously a great pairing!

Windancer was very patient as the other dams and yearling girls in the pasture came over to greet her baby. 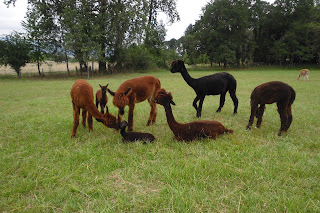 This boy's fleece is curlier than I've ever seen on a newborn, even though Mike claims "you always say that!" We are still contemplating his name: Galileo's _________. Perhaps something astronomical and suitable to the human namesake. Herdsire Galileo already has sons named Aries, Cassini, and Callisto (moon of Jupiter that the astronomer discovered). Since we have other Galileo cria due in the fall, perhaps a theme of names from Star Trek... 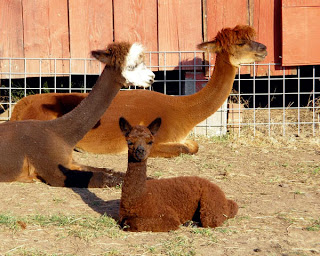 Galileo's son with Aunt Summer and cousin Gitana.
Now there is a trio of dark chocolate brown babies dashing through the fields, and usually I can only tell which one is which by the mom it's next to. Perhaps I could get colorful ribbons to pair the sets: green, yellow, and purple. ~ Just kidding, I would never put a nametag on such young, adventuresome animals... 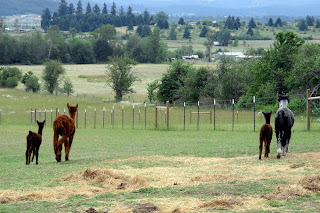 Rockford half-sisters and their moms
Posted by Ann Dockendorf at 6:53 PM 10 comments:

Killdeer, the Sequel
As predicted, the killdeer parents took turn sitting on their eggs and protecting the nest. Whenever I ventured through the gate to check on any progress, the resident one would go to another area, feigning lameness to draw me away. I'd quickly snap a photo and exit.

On Day 24, I noticed both adult birds present in the dirt. Thinking this signaled hatching, I checked the next day and was completely surprised to find no evidence of birds at all -- no discarded shells or feathers or poop or any other traces of their almost month-long habitation of the dip in the dirt that had been their home.

The dams were quite happy to have that pasture again, only now the grass was so tall that Mike had to mow it. Pacas are particular and will not graze tall grasses, preferring shorter, more tender (sweeter!) shoots.

Cria Watch
After waiting almost a year, due dates for three of our dams were this week: two due June 9th, and one on June 11th. They are all experienced moms, and as the days drew nearer, I kept the herd close to the house so I could observe through the windows. Cria are generally born between 10 a.m. and 2 p.m., so they will be up and running away from predators by evening. 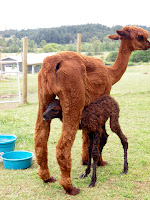 There are definite physiological signs to watch for, such as a softening and stretching of the tendons beneath the tail, frequent visitations to the poop pile in response to the internal pressures, and perhaps laying on one side or the other, to get comfortable as the cria repositions itself.

Once I saw Disa head back up towards the barn, where her daughter was born last year -- sometimes they return to the same place for birthing. But no, she was simply grazing along the driveway. She moved to different areas frequently throughout the morning, and was humming a lot. The next time I glanced out the window, I noticed another dam peering intently towards a tree. There in its shade was Disa, and a baby on the ground. None of the other alpacas had noticed yet, so it had just happened.

I grabbed a notepad and my iPhone, and ran to the barn for my 'cria kit' and towels. The cria was already sitting sternal (upright), and Disa had delivered the placenta. Flawless alpaca births are essentially bloodless. The baby was wet and easily chilled on the overcast day, and laying in the dirt, so I scooped it up with a towel and carried it to a flatter area in the grass. A girl! Very dark brown, graduating to black on feet, ears and nose. 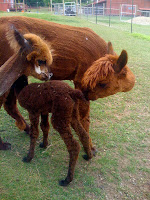 Once I was sure that mom and baby were safe, I dialed Mike to let him know, sent him a photo to show around the office. And called neighbor Elissa to come see.

There is a post-birth checklist to step through, so the notetaking began: time of birth, first standing, first nursing, dip the umbilical cord, etc. All of this while sitting on your hands as much as possible and observing from a distance, to allow bonding. Disa did good: got pregnant on the first breeding, and her delivery was "textbook" quick and clean.

This was Disa's third pregnancy and third daughter, all by the same gray champion herdsire, Aussie Rockford. Hence, we're considering the name "Trinity." She is of solid coloring, whereas her two older sisters are light/medium rose gray, with unique markings. [photo: Ladyhawke greets her little sister.] 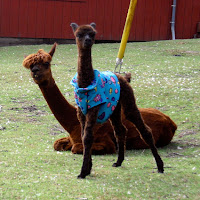 Night temperatures are in the low 50s, and since crias do not regulate their body temp well the first week, I put a jacket on our new little girl. It's a toddler-size flannel one that I got at a thrift store and cut off the sleeves, buttoning along her back. She only needed it for the first couple of nights.

One Down, Two to Go
Windancer is a small-framed dam and it looks like she swallowed a watermelon. However, it was Fabia that birthed next, in 15 minutes from start to finish. Like Disa, she's a push-button dam: one breeding, quick delivery, and she knows what to do. This time Fabia was in the field (with Disa, her baby, and Windancer) -- they are so much happier there than being confined, stressed and nervous, in a pen away from their herd. I was watching through binoculars as she paused in her grazing and began pushing. Fabia lay down a couple of times, readjusting. 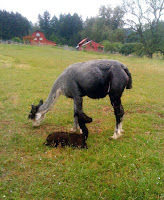 By the time I got out there with cria kit, towels, etc, the baby was on the ground, cushed (sitting upright). Only when she rolled to her side to stretch did I discover that we had another girl (!), and almost the identical color of Disa's cria. Again, the papa is Rockford, and Fabia is also gray, but their daughter (the 5th pairing of these two) is dark brown with black points. Wow, half-sisters and so very similar!

I took a lawn chair, clipboard with checklist, a knitting project and audio book out to the edge of the field to observe. This little girl is strong, too. 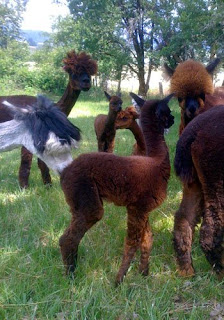 Thankfully we've had overcast days, so the sun has not been too hot for these dark little ones. I try to shoo them into the shade so they don't overheat, but the moms often have different ideas. Here, gray Fabia is checking on her daughter, with Disa (sitting) and her cria in the background; Windancer looks on just behind Fabia's head.

Name choices will be announced as soon as Windancer's cria births. She doesn't appear to be in any rush!


The photo of the "sun goddesses" was snapped the previous week. Pacas love to soak up rays, belly-side to sun. They can lay very still for many minutes, even the blackest alpaca on the hottest day.