How Big is BIG?


When visiting another alpaca farm recently, I was surprised to see the owner offer whole carrots as treats rather than the bite-size rounds that I slice for them. Sure enough, the animals handled the long root just fine. So tried it with our adult males, making sure no one choked. It's entertaining to watch them figure out how to get the carrot into their mouths, but I still slice carrots for visitors to feed by hand.

Hopi the llama is a member of the adult female herd. She is a good education prop, displaying the answer to What is the difference between a llama and an alpaca. Hopi weighs in at 450 lbs, while Gracie ('Amazing Grace') is 155 lbs, an average size dam in the group. Behind the stands 18-month-old Raisa, about 120 lbs and not yet full height.

Striding back to the house after chores yesterday, I was just in time to see this incredibly healthy earthworm (are we sure he's from This planet??!) squiggling across the sidewalk. My boot was the handiest way to display his size. Alpaca 'gold' (manure) for sure!
Posted by Ann Dockendorf at 8:29 AM No comments:

Travel Lane County, our local Visitors Information Center, uses a descriptive tag line: "See all of Oregon in Lane County." We could have a similar one for yesterday's weather: See all of Oregon weather in 24 hours! The morning dawned in a crystalline fog, making the grass crunchy underfoot and icing cobwebs into visibility. A few hours later, the sun burst forth from cloudless skies to warm the day, enticing me outdoor to do chores rather than attend to indoor ones.

Barn cats Blue (a Snowshoe Siamese) and Pangur Ban (named for a cat in an Irish poem) kept me company, catching rays instead of mice.

As predicted, the afternoon witnessed a march of clouds from the coast. Overnight, a cold front blew in. Windows rattled and trees swayed, and the rain was intense. When I peered out at first light, I could see No Alpacas beyond their shelters.

After enjoying a cup of coffee and the Farm Report, I glanced out the window to discover fat, slow snowflakes falling all around! They made a valiant try of whitening the landscape, but the ground temperature was not cold enough for snow to stick.

Mike ventured out to open gates while I started breakfast. Kelly only wanted out long enough to do her business, then return indoors.

The alpacas are pretty oblivious to all this. If sleet pelts down, they run to get under trees until it passes. During such weather patterns, they have accessibility to shelter, if they choose to use it. Most just continue grazing.

Posted by Ann Dockendorf at 9:55 PM No comments:

Three-day weekends are such a boon to us, for Mike and I completely enjoy working together on a myriad of things. This past President's Day weekend we:

Nice that it's a short work week!
Posted by Ann Dockendorf at 6:05 AM No comments: 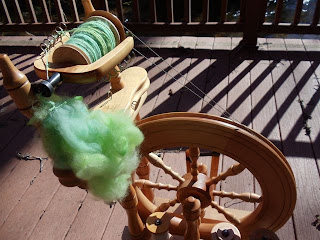 One creative way to diversify our herd was to trade like-valued animals with another farm. Alpaca Country, with a majority of white alpacas, wanted to add color to their genetics. We have many brown and black animals and could use more light colored (aka, dyeable fleece) animals. So we assessed the possible candidates and selected two 14-year-old production dams to trade. 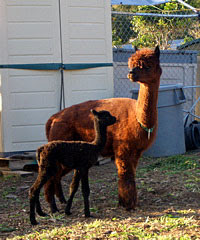 On Valentine's Day, 2005, Windancer was one of two alpacas we purchased to begin our herd. The daughter of Yupanqui, the number one pick of some of the first Peruvian imports, she is a small-framed mahogany-brown female who reliably breeds in one take and delivers unassisted on due date. A 'clock-work' dam. Windancer is not gregarious -- she prefers her independence -- yet her offspring are alert and engaging. Her daughter, Aymara, is ready to carry on the genetic line for us. 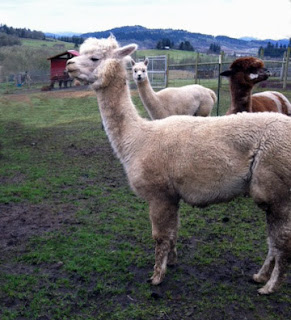 Now in her place is Kumari, a fine white female who is easy-going and friendly. She immediately found her place in the herd, self-possessed without being insistent. After just a few days, Kumari has learned the daily routine, the gates, and where the new-to-her boys are. It is fun getting to know her.
Posted by Ann Dockendorf at 7:02 AM No comments:

Today marks the birth of Abraham Lincoln 203 years ago. As a nation, we have been fascinated by early stories of the 16th president of the United States studying law books by candlelight, his pivotal position as leader of a divided country during the Civil War, and his murder at age 54.

Recently we enjoyed watching Sam Waterston's portrayal of Lincoln as a real human being who faced severe challenges on personal and national levels.

Lincoln's stern-looking profile is as iconic on the copper penny as is his face on the $5 bill. Generations of Americans recognize his tall figure in black top hat, black vest and tie, and long coat. And that black coat so identified with Lincoln was made of alpaca! 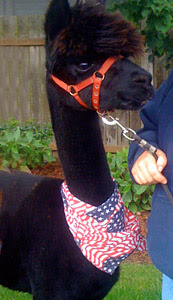 "Lincoln became one of the first Republicans. The oratory of this strange, serious man seemed to inspire the hopes of the people. They looked upon him in bewilderment as they saw this giant of the woods, in a black alpaca coat, with his sleeves rolled up, hammering away at the institution [i.e., slavery] which he believed to be unjust. His appeal was always one of peace..."
(quoted from the "Portrait Life of Lincoln: Life of Abraham Lincoln, the Greatest American" by Francis Trevelyan Miller, 1910)

With this bit of history in mind, we proudly named one of our black male alpacas 'Mr. Lincoln'. And whenever we 'dress' the boys with bandanas for visitors or excursions, he always wears a red, white and blue scarf.
Posted by Ann Dockendorf at 5:11 PM No comments: 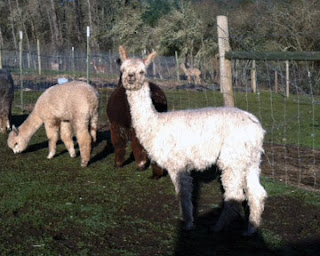 When we bought Q'Inti and her nameless cria, we decided to hold a Name the Cria contest at the recent Green Home & Garden Show. From almost 100 entries, we selected Kokopelli, a playful trickster and pied piper.

Kokopelli is the youngest of the six weanlings. Yesterday, Cindy and I weighed them all and took the opportunity to assess their fleece. Our little suri boy's is gleaming white fleece up close, and very fine.

The biggest surprise of weighing was that Ruana (female) weighed in more than either of the two slightly older males. Her fleece is dense and soft, but I really thought Tondero was the heavier. Can't tell by looks! ~ the scale is an important tool for herd health. 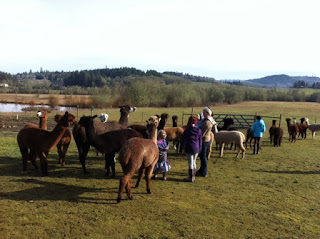 Today we had return visitors from last week's Open Farm Day -- two girls who where completely taken with the alpacas. After doing a bit of farm chores (spreading shredded bark in muddy walkways), they broke out the bags of carrots they'd cut up to share with the alpacas. When they walked into the hay field where the dams were grazing, alert eyes and ears quickly spied the orange-colored treats in crinkly plastic zip bags, and the excited girls were practically mugged.

Another visitor, a neighbor who is an artist, came with camera in hand to take photos of Kokopelli. It was her first time to meet a suri. Her paintings are quite remarkable, capturing the personality of each of her subjects.

All of this while Mike busily dug post holes for the vineyard fence!
Posted by Ann Dockendorf at 6:47 PM No comments: