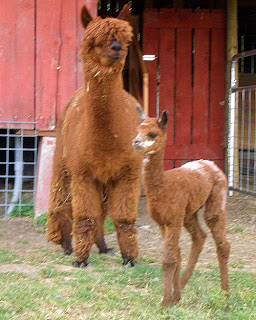 [translated...] "She Flies with Her Own Wings" -- a friend pointed out that this unusual phrase is Oregon's state motto. And since Disa's cria was our first alpaca birth at our Oregon farm, we like how it relates to the name we chose for her: Rockford's Ladyhawke. It suits her personality and her markings very well.

Ladyhawke is growing and thriving. She's changed so quickly in 3 days, learning what those long legs do and how to balance on them; how to nudge mom to standing so she can nurse. And even though hers was a completely normal, easy birthing, it is still a learning curve for us as new alpaca shepherds.

With the "Llama & Alpaca Neonatal Care" manual as guide, we stepped through each of the paragraphs, made the observations, accomplished the tasks, and gained new confidence. A few phone calls to Disa's former owner alleviated worries about where to best give a sub-q shot on a cria, and if a slight discharge from the dam was normal (it is).

For a few days, we've regrouped the herd so that a few calmer dams are in with the newborn, and the rambunctious 4-month-old Tesoro is in a different pen. Now that Ladyhawke is stronger, we will soon be able to reconnect the herd. The alpacas do not like being separated, and often cush near each other on each side of the fence.

I just peeked out the window to see Tesoro chasing birds. And we are once more on cria-watch, so soon Ladyhawke will have a playmate more her size.

Shearing is next week! The alpacas will finally be free of their winter coats and ready for summer.
Posted by Ann Dockendorf at 8:24 AM 1 comment: 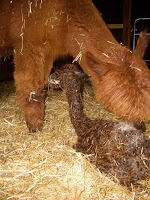 On Sunday morning we settled on the deck with bagels and coffee, with a view to the alpacas. I'd been out on morning rounds earlier and nothing was unusual. Now I did a nose count and noticed Disa's absence, so I went to see if she was in the barn. Indeed, she was, and not alone... "There's a cria in here!"

Mike came running. The cria was very wet and cushed (sitting upright, legs tucked under), only minutes old. We toweled it off a bit so it wouldn't chill, set it on a rug to pad the concrete floor, and backed off. I hadn't checked gender yet -- too hard to see on a dark little body in a darkened barn, and I didn't want to be overly intrusive. I quelled my curiosity since my 'need to know' to Disa's celebration of what she had produced, and their need to bond. 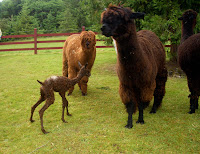 The area quickly filled with too many aunties checking out the cria, so we moved mom and baby to a clean grassy area where the sun would help to dry the wet little creature. Finally, I peeked... it's a girl! Overjoyed, we spent the rest of the morning observing, dousing the umbilical cord, doing minimal checks -- is Disa's milk in, is baby really nursing, etc -- and making excited phone calls to folks who had been awaiting the news.

Other than for his own daughter, this is the first time Mike had been present for the birthing process. Even though we missed the actual delivery, the follow-up responsibility was a first for both of us. 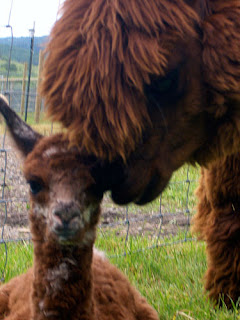 She's 16.9 lbs, and our first live girl after 10 boys in a row. Gestation was 11 months 3 weeks. The placenta delivered perfectly, no prolapse (which two of our dams had before, when agisting). What a relief to have such a natural, 'normal' birth! And we're already on cria watch for the next one.

She appears to be dark rose gray, a sort of deep maroon overlaid with taupe. She has a light gray dusting on her rump and across her face and ears, and a streak on her forehead. Her sire, Aussie Rockford, is MSG (medium silver gray), and her dam is out of grays.

We're still mulling over her name... 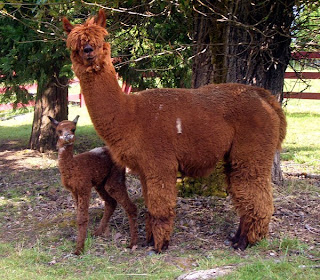 Posted by Ann Dockendorf at 10:22 AM No comments:

At dusk most evenings, the young alpacas love to run and play. Tesoro's "gazelle-type" romping is called "pronking." It looks like he's spring-loaded!

At the end of that run, he sidles up to Windancer, not the least bit out of breath, and posed as if he's been there all along. Then he bounced off again.
Posted by Ann Dockendorf at 10:51 AM No comments:

by transport, not by birth... yet.

With the latest nine sets of alpaca toes that stepped off the transporter this morning, most of our herd is at our Eugene farm now. Matt and Don drove through the night and arrived at 7:30 a.m. Flora was first off the trailer, quickly followed by the others. At four months old and still nursing, Tesoro stayed close to his mom, Windancer. 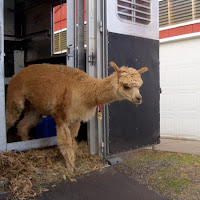 The girls were met with open spaces and lots of green grass -- and six other inquisitive dams on the other side of the fence. Galileo and Orion checked them out as the group ran past through the nearest open gate. Curiosity took them into the next pasture, where we really wanted them to go.

Next, the weanling males disembarked, to be rejoined with Dakota and Sorrento. Sundancer (7/06) is still small for his age, the same size as Sulaymon, who is a whole year younger (7/07). Sulaymon's white fleece is dirty enough to look like Sundancer's golden locks. Soon we will become adept at telling them apart at a glance. They all have their nametags on, scribed by Humberto, sometimes with Spanglish spellings. 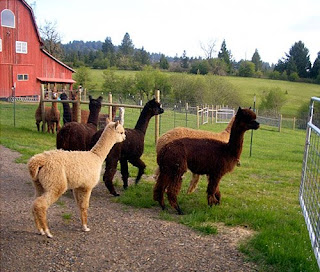 Our last five alpacas more are in various stages of breeding in So CA and will join us in a few months. Plus the weanling Modoc who missed this 'bus' so will catch the next one. He was shorn yesterday, so at least he's ahead of everyone else in that respect.

Nineteen alpacas reside here now. Waiting for the birth of Disa's cria to make it an even 20! 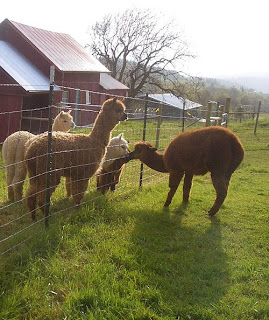 Posted by Ann Dockendorf at 3:14 PM No comments: 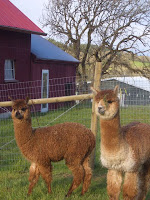 Last Monday, our 'sheep friend' Elissa drove with me to pick up our two yearling boys who at been at the CA Classic. The 1990 Silhouette van is just right for one adult or two younger alpacas. Dakota and Sorrento hummed and adjusted and cushed then readjusted the whole 2.5 hours, and they were delighted to disembark upon arrival at their new home. For four days they had been transported, penned at a show, paraded in the ring, trailered to a strange place for overnight, then ridden in the van. Enough!

But good buddies can endure lots together. They look so 'at home' in their pasture now. By protocol, they are quarantined for three weeks to make certain they did not pick up anything in their travels. So far, so good. 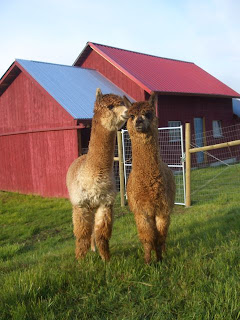 Huge THANK YOUs to Larry and Paula Vellozzi of Adorabella Alpacas in Grants Pass for bringing the boys up to Oregon for us!

[What secret is Dakota whispering to Sorrento?]

Our next set of alpacas arrives by Cedar Ridge Transport this weekend. The five dams and four young males will almost double our alpaca population. And we will finally get to meet Tesoro, our Casanova son born in January. We will need to step up the pace of dispensing food and scooping poop. Greeting them each morning by name is a pleasure.

The Neonatal Class at Oregon State University's Veterinary School last Saturday was timely and right on target for me. Drs Long and Cebra exude enthusiasm, humor and passion about these marvelous creatures and their well-being. The doctors' knowledge and insights, and willingness to share them, were a huge boost to me as we begin 'life with alpacas.'

There were only 12 'students' so there was ample time for individual questions and discussion. Part of the class was a lab experience where we practiced identifying -- by blind touch -- a dystocia: awkward fetal presentation that needs manipulating to correct position for birth to occur. With these practice sessions, the confidence I have in caring for our animals has increased a notch, and I am grateful that such opportunities are available, for I always want to learn.

Then on Monday afternoon, the class became very real for me. While driving down to pick up the yearling boys, I got a call from our agisting ranch that Autumn had gone into labor; but it had not progressed, so they called the vet. She had a uterine torsion (rotated or 'flipped' uterus). The doctor had never dealt with that before (he's mostly goats, sheep and horses), so another camelid vet (an hour away) talked them through how to rotate the uterus back into correct position, with success. I was so glad to have seen this very technique in the movie and photos at the class, because I could picture it exactly. 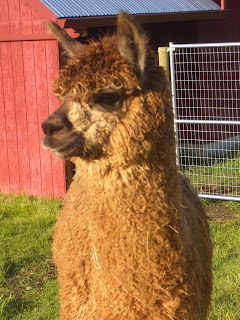 Autumn was dilated, ready to deliver her cria. It was a dystocia: anterior presentation with head turned back. He repositioned for birthing, but that was very hard due to the size. Initially, the cria was alive, but the umbilical must have been broken because during the long process to birth her, and she drowned. They reported that she weighed 25 lbs! The dam is large-framed, but not over-weight, and gestation was right at 11.5 months. She was Sorrento's full sister and would have been a very welcome addition considering the last 10 births to our herd were male cria. 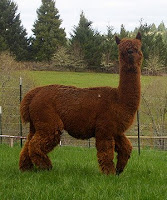 We check on Disa several times a day, sometimes by peering out the window with binoculars to be less disruptive. Of course we hope that birth (our first one here) will be normal, but after taking the neonatal class, I feel somewhat equipped to identify if it is not. And that information will help me to not panic.

Posted by Ann Dockendorf at 7:07 PM No comments: