Downs and Ups of Animal Husbandry

As of the last posting, we were excited about the duo alpaca births, and still anticipating two more. We worked outside all day on Saturday and kept a close eye on Flora (slightly overdue). Didn't observe anything unusual or any pre-labor activity like straining at the poop pile.

On Saturday night, she was very quiet. In fact, she remained cushed in one place the entire night, for I went out and checked on her several times, and again at dawn. Just before 8:00 she started laboring, but something was not right. It was a brownish placenta she was delivering, not a cria.

We called alpaca friends, and the vet. Front feet were presenting along with a turned neck instead of the head. It took four of us to support Flora while Dr Pete delivered a stillborn female cria. She had likely only been dead for a day. Perhaps the umbilical chord had broken in the repositioning for birth. I had not seen Flora's water break, a sign of impending birth. We chose not to do a necropsy.

Dr Pete tended to Flora, verifying that her uterine lining had not been torn, that the vessels were pulsing normally, and flushing her with mild antibiotics. We gave her some homeopathy to assist with healing, and later, with grief. She grazed near her cria for awhile, saying her good-byes before returning to the barn with her herdmates.

Since Flora's milk was not stimulated by nursing, it did not come in. One teat swelled a bit over the next few days, but there was no milk to express. On the doctor's advice, we are cutting back on her pellets for a week, putting carrots in her bowl for something to chew on while the others eat their pellets in the neighboring pen.

The temporary reduction in calories will assist drying her milk, as well as call on some of her reserves. Flora tends to be a full-figured girl, so this will help to get her back in balance. Before breeding again in late September, the vet will check to make certain there is no infection.

One day when the dams and crias were in the pasture next to the farm office, I noticed several of the crias sitting near Flora, as if comforting her. Alas, I did not have my camera handy, so the picture is only captured in my mind. 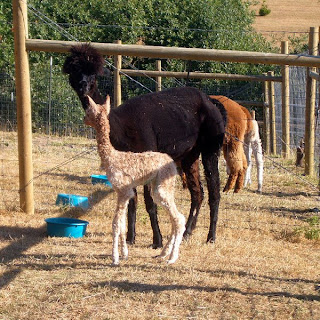 On the following Tuesday morning, I went out early to check Black Lace — the last of our dams due in August. She was cushed and birthing her cria, and from the slight dryness of its ears, I knew she had been laboring for a bit. I gloved up and went in to check the position. The cria's knees were bent, so Lace needed help. I was confident enough to identify the problem, but not to adjust the dystocia myself. My job was to Not Panic. Immediately I called Dr Pete and he came and delivered a healthy male, 19.1 lbs.

As with Flora, we will do a pre-breeding check to make certain there is no infection. This is advisable anytime human intervention is necessary to go in to deliver a cria.

Mike had to leave for work that morning. Since it was only Week 2 of a new job, he did not have the luxury of calling in late. But he was able to stay long enough to see a healthy cria safely delivered before he had to dash away. 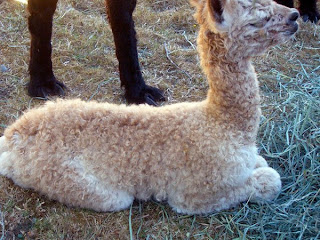 We have named Lace's boy Rudulfo's Troubadour, for he and his mom hum to each other more than most. Troubadour's were Spanish/Moorish in origin, and their songs often included themes of chivalry and romantic love. He has the confirmation and fleece possibilities of a quality herdsire, so the love songs should serve him well.

Even with the sad loss of Flora's cria, it's a relief to have the births complete. The last alpaca due this year is Murphy Brown in early October with Orion's first offspring. Lately, Murphy has really begun to 'show' and she is eating more. 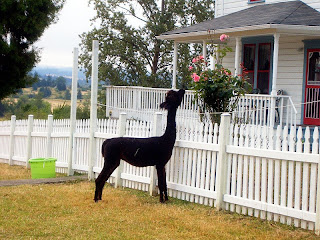 When Dr Pat was here last week to do well-cria checks and regular herd health, he also ultra-sounded four other newly-bred dams. With three of them, I was able to see the tiny 45-day fetus moving; on the fourth, Sable's breeding date was later, so the view only gave us a 50/50 chance of viable pregnancy. But we spit-tested her the next day and she ran and kicked at the male rather than cushing for breeding. We will u/s her again in a month.

Next project: tomorrow I will take Sheba (accompanied by her 2-month cria, Jedlicka) to OSU to radiograph her jaw to determine the cause of a chronic infection. She is a good traveler and will cush in the van on our hour-long trip. 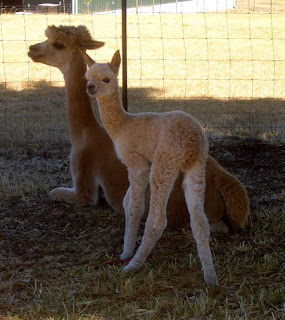 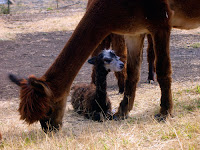 On Wednesday morning, two cria were born within 45 minutes of each other. And neither delivery was by Flora, the dam I've been watching so intently. Flora is the first of four alpacas due within a three-week period, so I was surprised to glance out the window and see Sonnet (last due of the four) in the midst of birth, out in the pasture.

I ran to the barn to get my birthing kit, some towels and a bucket of water. As I approached, I noticed the other alpacas further down the field, gathered around another cria! Sonnet was obviously still in process, so I rushed over to see a still-wet cria just attempting to sit upright.

All the aunties were sniffing and greeting it while Summer was anxiously humming to the little white-faced creature. With a towel, I scooped up the baby, checked the gender -- it's a girl! -- and carried her to a pen, Summer trailing at my elbow. I wanted them in a safe place and undisturbed while I went to see how Sonnet was doing. 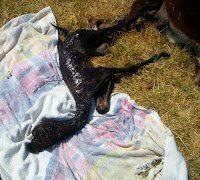 Labor appeared to be at the same stage as when I first noticed her: head and one leg out, partial second leg. By checking the flex of the joints, I was certain they were both front legs (proper for delivery), rather than a front and back leg, which would have to be manipulated for birthing. Thank goodness! But Sonnet was up and down, laying on one side or the other, and the cria was mouth-breathing continuously. I phoned another alpaca owner to ask some questions, and Heather volunteered to come right over. (I so appreciate this about alpaca people!) 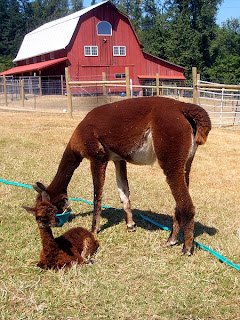 Sonnet's due date was August 18th, so this baby was a bit early (known as 'dis-mature'), teeth not yet erupted, but quite healthy at 17.6#s. Birthing was a little bit long (one elbow was caught on pelvic ledge, otherwise quite normal), so both baby and mom were tired, and it took the cria some time to gain her strength. Giving the baby a dollop of Karo, getting her out of the sun, giving Sonnet a pain relief med, all worked together toward successful nursing. Her sire is RH Bentley (DB), and we've named her Bentley's Carrera. Her coloring is identical to her beautiful mom.

While attending Sonnet, I could see that Summer's cria was up and nursing quite well. She had delivered right on her due date. This little girl has a white/silver face and feet, yet her silky fleece is a taupey-brown color, probably dark rose gray. She was 15.5#s, and sired by Spirit Song's Vivaldi (MSG), owned by Silver Sun Alpacas in Santa Ynez, CA. 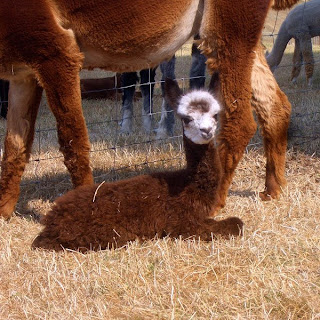 Her name still eludes us. Since Vivaldi composed The Four Seasons, and Summer is the dam, it seems there would be a natural tie-in. Summer and her lively little pixie hum and sing to each other a lot, so something musical is appropriate.

Both crias are nursing well (always a relief!) and have gotten steady on those long legs. The older three amigos (Ladyhawke, Jedlicka, and Gryffin) are inspired to romp past the new little ones, showing off their dancing feet.

Now it's Flora and Black Lace's turn. All week, I've been reminding them: "nose 'n toes!" 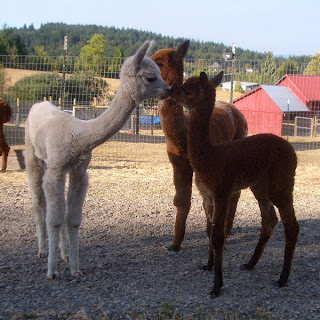