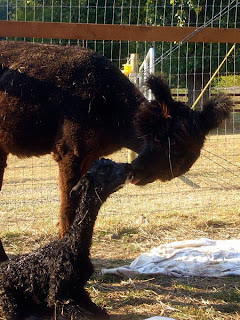 The last cria born to our herd this year arrived on Monday, September 29, and thankfully it was a simple, quick birth.

Murphy Brown is generally the first to greet me in the mornings, and very interactive with me when I'm in the pens. About three weeks ago during evening chores, I noticed her sitting very still, then sometimes rolling as if uncomfortable. I thought perhaps the baby was shifting and pressing on a nerve, and consulted our vet for his advice. Since Dr Pat was in our area the next day, he stopped to check her.

From my description, he suspected a uterine torsion (twist), but Murphy's heart rate and temperature were normal, which is generally not the case if there is a torsion. They are more common when the fetus us large, and if anything, Murphy looked small for her 10+ months of pregnancy. But when he did a manual check, there was a definite rotation of the ligaments supporting the cervix.

Torsions are rare, and most are "right-twist." Only one in 20 twist to the left, and that was Murphy's case. He could reverse it with external manipulation, but it would take three people, so I called our neighbor Elissa to come and help.

Once Murphy was mildly sedated, we got her to cush and rolled her on her left side. Dr Pat held and pushed on her uterus as Elissa turned her hind quarters and I rotated her neck and front legs. We returned Murphy to cush (upright) position and rolled her in the same manner one more time. Upon another manual check, Dr Pat declared her returned to normal positioning. 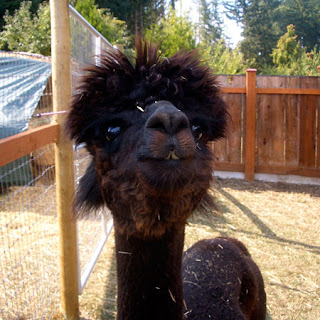 I kept a close eye on Murphy for the next few days, and she was once more her curious, interactive self. She's a tall, elegant dam, but needed some extra weight in the last few weeks of pregnancy, so she eagerly anticipated her morning bowl of pellets, rice bran and a handful of alfalfa for added calories.

Last Monday morning, I did not immediately see Murph's engaging face, so I went looking for her. She was one of the last to emerge from the barn, and when she turned, I saw that she had begun birthing. The cria's head and two legs were out, though still encased in the unbroken sac. I nicked it to release the water, then edged Murphy into a clean pen, and the other curious looky-lou's out.

Keeping a watchful eye on her, I gathered towels, the cria kit, a note pad and pen, and my camera. Within 15 minutes the baby was on the ground, a healthy, normal boy. There is little fluid and no blood with a normal birth, but the morning air was cool, so I towelled him lightly and stepped away. 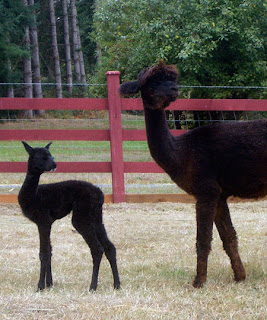 I was thrilled to see that the cria was black, for this is the first offspring of our vicuña-colored herdsire, Canzelle's Orion. He is bred to two other black dams, and soon to a gray one. Orion's sire is medium silver gray Patagonia's Quijote, so we are hoping that Orion will also produce gray.

This is Murphy's second cria, and she is an attentive mom. Elissa and visiting friend Una came over to see him. We kept our distance to allow mom and baby to bond, while I took notes of when he sat sternal, tried to stand, tried to nurse, etc. Although he seemed small to me, he weighed 15.7 lbs that afternoon. By Friday, he had already gained two lbs.

Murphy still gets her morning bowl of calories, to increase her weight during lactation. On a scale of 1-5, she is a 2.

We have named him Navarre, the black-clad captain in the tale of Ladyhawke who cared for her each dawn, then turned into a wolf at dusk as Isabeau reclaimed her human form. Since Ladyhawke was the first cria born to us this year, it seemed fitting that the last one is black Navarre. 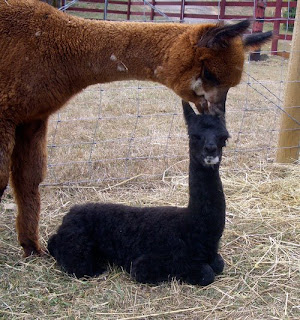