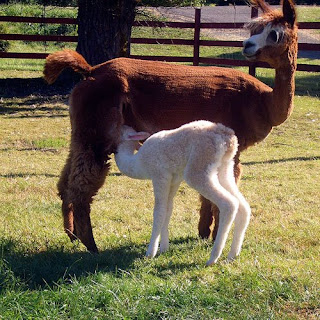 As the old rose bush by the picket fence bloomed with soft pink buds, I crossed my fingers that it was harbinger of another female cria. And it was! Yesterday Sheba gifted us with a champagne-colored daughter -- the first offspring of Cusco North's stunning white male, Rudulfo.

Sheba's pregnancy was at day 366. We had been watching her closely for weeks, but were not really concerned since she is a 'push-button dam' who has had several cria with no difficulties. Still, it was only our 2nd birth since we've had the alpacas in our care, and we didn't want to miss seeing this one. Life is so magical!

I am in and out of the pens and the barn most days, so the dams are accustomed to my random presence. And I talk to them by name as I move among them, just like I do with my dog and cats. Sheba was cushing, humming, up and down, and finally she was dilating. I returned to the house to get my neonatal book, my knitting and my camera, and let Mike know that birth was imminent. 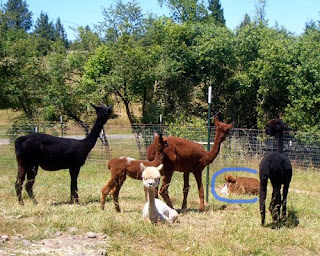 Positioning myself just out of Sheba's sight, within 10 minutes I called Mike's cell phone to let him know that a nose emerging. This was the first birth either of us had witnessed from the very beginning.

I also dialed another nearby alpaca breeder, just to make sure she was available in case we needed assistance. Over the next half hour, I called Sheri 3 more times: I don't see toes yet; the head is presented but feet are on top... she carefully stepped me through each phase so I would know what to expect, and how long the progress should take if all things were normal. Her knowledge at each step was a calm reassurance. 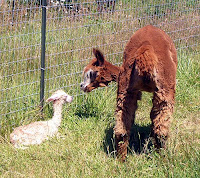 Sheba alternately stood and cushed, trying to adjust her discomfort. Curious Miss Nutmeg was overly attentive, so I escorted the 'helpers' out of the pen and they watched through the fence (birthing dam is circled in blue). Sheba was cushed during the final expulsion of head and front legs, and the baby lay half-delivered in a jumble on the grass. So with her next contraction, I assisted by pulling the hind feet free. The cria rolled over and I could see that we had a girl! I moved her away from the fence-line and exited quickly for bonding time.

With the 'Cria Checklist' on my clipboard, we observed and documented the time markers after birth: sitting in an upright cush position by 4 minutes, the umbilical cord doused with Novasan, cria standing at 10 minutes old, etc. And once she did stand, she remained on her feet for over half an hour. This is a strong little girl!

With a towel, I picked up the wet baby to move the little family to a flatter pasture, and on the way stopped in the barn to weigh her. Twenty pounds! Sheba is a big girl, and her pregnancy was on the long side, so we were thrilled with such a normal birth. Being able to observe the whole process was another good learning experience. 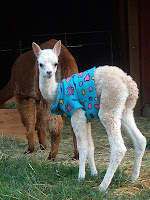 We purchased Sheba a few years ago from a ranch in Santa Ynez, CA. Before raising alpacas, Bonnie was a horse-owner, so in honor of this cria's 'roots' in Santa Barbara County and of Bonnie's love for horses, we've named her Rudulfo's Jedlicka, after a popular western-wear store in Santa Barbara and Los Olivos.

When we tucked Jedlicka in for her first night, I put on the flannel toddler jacket that had graced young Ladyhawke. Jedlicka is so big that she will need the next size soon. Pre-dawn is cool, and like all newborn mammals, temperature regulating and bodily systems and functions must adjust. I was glad to see her peeing this morning!

So, since there are no blue roses, does this mean we'll always have girls here?? At least our string of male births is being nicely offset by welcoming Ladyhawke and Jedlicka to our herd. 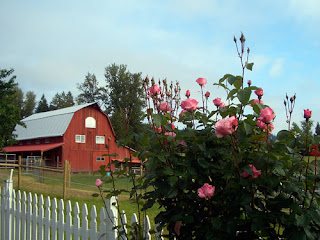 In Tribute: Today, June 25, marks my dad's birthday. Jud Holt was a large and small animal veterinarian in East Texas, and although he died several years ago, he would have loved the alpacas. I think of him often as we learn more about life on our farm and raising these unique animals.
Posted by Ann Dockendorf at 6:08 AM 3 comments: 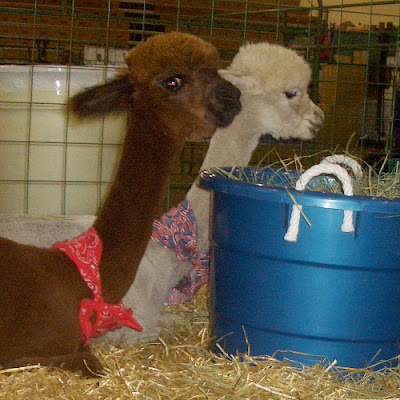 We've just completed our first 'show' -- a booth at the Emerald Valley Alpaca Association's annual Alpaca Marketplace. In a long list of 'firsts,' it's the first time we've had a booth of our own plus taken our own animals to a venue. Meeting people that stopped by was the most fun, talking about the animals, the possibilities and enjoyment of raising them, and using their amazing fleece. To some folks, alpacas were completely new animals to them. Others were well-acquainted and had dreamed of them for years.

We sold some fleece from the recent shearing, and some postcard of scenes from our farm. Mostly we invited people to join in on Open Farm Day this coming Saturday, to come see them on the farm in a more 'natural' habitat. 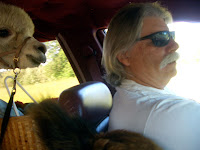 Dargan and Sulaymon went to the show, their first time off the farm. They were mellow and well-behaved. A show like this is 'boot camp' for them, where they learn to handle people coming up to them, and walking nicely on a lead. We'd take them out of the 8'x8' pen several times a day to walk around for exercise and diversion. In keeping with our Americana theme, they sported bandanas on their elegant necks. The bag of prime fleece from recent shearing and a 'Before' photo completed the setting.

Mike volunteered as a clerk in the Fleece Show. He held down the fort when I dashed home midday to let our dog out and to check on our dam Sheba, due 'any day now.' And I'd either make lunch or stop off for a burger to take back to him.

All in all, the show was a great experience for us. Now we look forward to greeting visitors on Open Farm Day on Saturday. Eight farms from the show are hosting this event, and it coincides with Eugene's Olympic Track and Field Trials, so there will be many visitors in our fair city. Lemonade, anyone?? 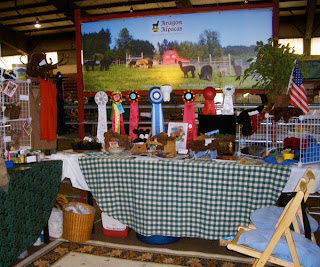 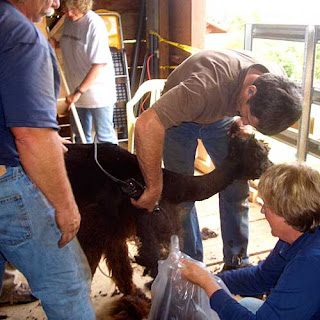 After booking the date in January, planning and prepping for days, our herd of 20 went from heavy winter coats to summer skivvies in just over three hours. It had rained lightly the night before, so first thing that morning, Mike and I haltered the boys and towel-blotted them as dry as we could. The girls had mostly slept inside the barn, so were much dryer.

Since we are still so new to handling our own animals, we invited a few other alpaca owners to come and help us. Our shearer, Allan Godsiff, shears while the alpaca is standing, rather than anchored down with restraints, so we knew it would take confident holding.

For a few of the younger ones, this was their first shearing. Some of the more experienced dams put up with the indignity with a smattering of reserve, while others let us know their displeasure by screeching, spitting and/or peeing. For the spitting, we had a sock ready to loosely put over the culprit's mouth, and rags to mop up when needed.

The two 'most pregnant' dams were given Rescue Remedy to help soothe their stress. Sheba is due 'any day now'... and shearing did not bring on labor. Nutmeg is due mid-July, and thankfully she has held her pregnancy fine. Some dams have been known to stress-abort a few days after shearing, so that is always a concern for late-term pregnancies. But overheating is also stressful, so we take off minimal fleece as a compromise, just to cool them. After giving birth, we will trim their legs. 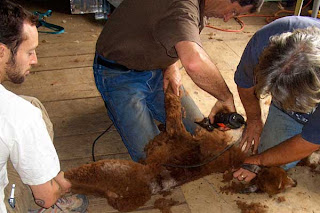 Even 10-day-old Ladyhawke had all of her fuzzy blanket sheared. The ultra-fine baby fleece, called 'tui' fleece, is just like velcro for pasture debris, so getting it off makes for a much cleaner alpaca for a year.

Our shepherdess-neighbor Elissa was in charge of collecting the fleece as it came off. We sheared inside the barn, and the only place large enough to lay out the damp fleeces was upstairs. So she and her helpers collected it in batches of 'blanket' and 'seconds' (marked with the alpaca's name on colored-coded paper) and laid it out on big sheets of plastic to dry in the open air. 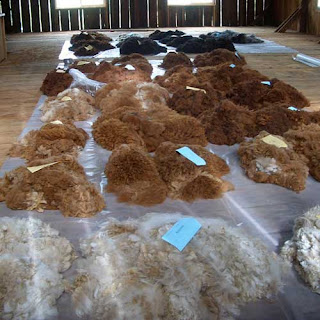 Thankfully the new barn cats have not yet been transitioned to the barn, so the upstairs world of fleece has remained undiscovered by them. Our indoor cat loves her alpaca-fleeced box, so I'm sure Charlie and Pangur would reek havoc if they knew it was there.

Nights are still cool (40s), so we put a cria coat on Ladyhawke. We had borrowed one when she was newborn, but a friend suggested going to the thrift store and getting some toddler jackets. Even though I have flannel and nylon fabric to make simple cria coats, the time to do so doesn't yet exist. So I got 4 jackets, cut the sleeves short on the smallest one and put it on a squirming Ladyhawke, buttoning along her back. Immediately, all of the aunties had to come over to sniff it and check out her new jammies. 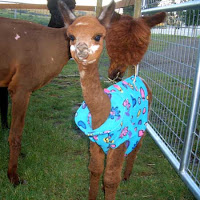 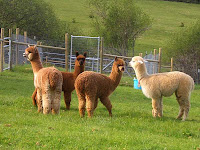 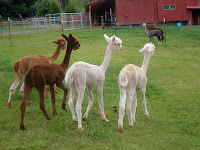 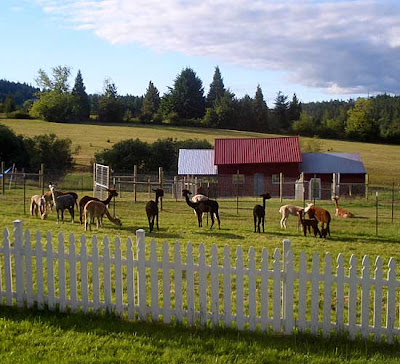 Now looking more like a herd of deer than alpacas!
Posted by Ann Dockendorf at 7:30 AM 1 comment: