Gryffin and Lincoln visited Bethlehem's manger in a local stable last week, participating in a living Nativity scene presented by the youth group of Grace Lutheran Church. The Christmas story of Jesus' birth was staged in the church parking lot in a 3-sided 'stable' with sturdy fence, good lighting and sound system. At first the yearling boys were overwhelmed by traffic noise, lights, and people, but then they settled down and nibbled the at the straw bales. Sheep and donkeys were unable to come this year, so alpacas represented the animal kingdom at the humble birth. 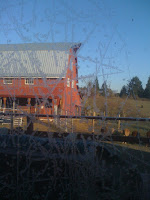 Early in December, Eugene experienced a week of below-freezing temperatures. The great challenge was to make sure water buckets remained liquid, so we invested in some floating warmers. Another technique is to mount a light just above a large bucket so that the air flow continues to move due to the heat of the bulb. But that method did not work well in 7° weather! Pipes to the barn and in the studio froze, but nothing burst. (View to the barn through the frosted sliding door.)

Freezing temps made cleaning up simpler since the 'beans' remained solid. And I listened to several audio books to distract me while raking the barn pens each day, all bundled up in hat, gloves and thermal boots. All 13 cria snuggled up next to their mamas and did well, even though a couple of them are only a few months old. I jacketed two of the older dams whose fleece is shorter than the younger ones. I am not sure they appreciated it, but it made me feel better! 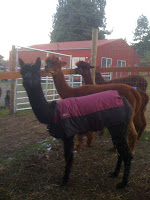 There was no precipitation during this frigid weather, and I am healthy, so the cold did not bother me. In fact, it was preferable to working out in the 105° weather of August! 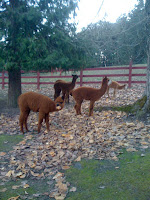 The pacas have a natural rhythm to their day -- the girls and cria all return from grazing in the big field about the same time every afternoon. Yesterday a movement caught my eye, and I glanced out the window to see the young ones running in circles and racing back to the pasture up again. Such delightful dancing, even the teenage girls joined in, and a couple of the moms, too. Maybe they were celebrating solstice and the return to lengthening daylight hours!

I wasn't able to capture that cavorting on film, but here are a few of the cria playing in the leaves.
Posted by Ann Dockendorf at 10:08 AM 1 comment: