The fifth annual Eugene Good Earth Home, Garden & Living Show has a few new stars this year: Alpacas! What better place to showcase how connected these unique livestock are to sustainable living?

Aragon Alpacas has joined with a few other local alpaca farms to form the Alpaca Breeders Connection, (ABC) and this Show is our first group outing. The response from the organizers, Berg Productions, was immediate enthusiasm. As we set up our booth and the pen for guest alpacas, other vendors came to greet us. And the public flocked to our booth non-stop, full of wonder and questions, and eager to purchase alpaca products. 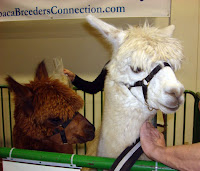 Our goal is to introduce folks to the entire process of raising alpacas, harvesting and using their fleece, and creating warm, wearable art and useable objects.

Each day, two alpaca ambassadors fresh from our pastures braved the crowds of curious people. Baskets full of fleece elicited many Ooohs and Aaahs when touched. Folks gathered to see yarn being spun on a spinning wheel — an old-fashioned machine that you don't plug in! 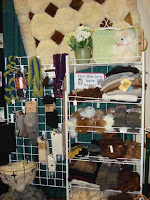 Hand-knit or crocheted accessories, commercially made sweaters and coats, socks and gloves — all lined our booth. And there are so many earth-friendly things you can use this "wonder fleece" for:
Even beyond fleece, there is the final product: "alpaca gold". Since alpacas are ruminants, their manure does not have to be composted before applying to plants. Vegetables, flowers, fruit trees, vineyards — all will benefit from direct application or manure tea. We even spread it in our hay field, completing the circle of life. 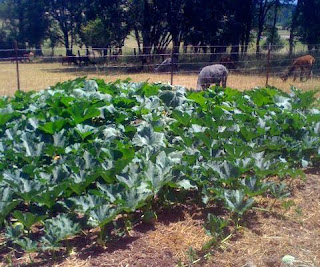 We often state that alpacas come in 22 natural colors,
but all of them are "Green." 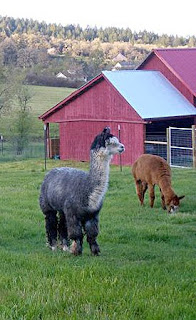 Next Saturday, January 30th, the ABC Farms (map!) will host Open Farm Day from 10-4:00. Seeing alpacas in a show setting is one thing, but seeing them in their home pastures, grazing and resting and playing, is much more fun, for both the alpacas and the people!

Thank you to all who visited us at the Eugene Home Show! We love what we do, and we love sharing that with you!

(And if you are reading this and you are nowhere near Eugene, Oregon, I invite you to find an alpaca farm near you and go for a visit. That's what we did five years ago...)
Posted by Ann Dockendorf at 6:04 PM 3 comments: 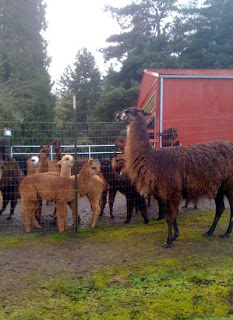 In this New Year, we have a new addition to our herd: Hopi is a stately llama lady who formerly lived with horses. Her llama companion was killed by a cougar last year, and she mourned him, so her caring owner wanted to place her with other camelids.

Overwhelmed by all of the curious alpacas for the first few days, Hopi has made a good adjustment to life among them in less than a week. Surely they must seem like munchkins to her! Most of our adult females have lived with a llama in the herd before, at their other farms.

Now Hopi lopes and frolics with the dams and cria down to the big pasture each morning. She is a watcher, a sentinel guardian. And she gives us llama kisses.

Once again we prepare for the onset of the Winter season at Aragon Alpacas. The indoor barn areas are fluffed with bedding of the generic "horse hay" we grow in our hayfields during the growing season, and a solid wall built from a couple of tons of bales stands against the Norwest-wall incursion of cold winds. It's actually great hay for horses, cattle, sheep, and other livestock, but the alpacas only seem to be interested in it when it's either growing in the field or they can pilfer it from somewhere they're not supposed to be. (Did I mention they can be a little on the mischievous side?)

A cold snap rolled through a few weeks ago, driving daytime temperatures into the "teens" for a week -- it was 7° on our front porch one morning! -- and the studio and barn water pipes froze solid. Each primary water bucket in the pens had a heater, but they had to be resupplied daily. We experienced firsthand the age-old Pioneer Method of dipping water by the rope-and-bucket from the underground reservoir, which was fortunately being refilled by the well pump. We insulated it last year when the well-head plumbing froze. We also lost the rechargeable Ni-Cad batteries from our cordless power tools to the cold. 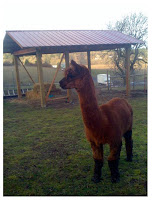 Our "alpha" male herdsire, Peruvian E Galileo, has a new feature in his pasture - a small but heavily engineered and constructed pole barn to keep the rain and snow off his ears. He, of course, doesn't seem to care much, but we got worried about him when, last year, we could only see a flat field of snow with a "bunker" in it that got up and shook it off every once in a while. He actually didn't seem the least bit cold while doing his "day job" of managing All Things Alpaca, but it offended our sensibilities that he had no place to get out of the weather should he want to, not even a tree. So in addition to the new pole barn he has a new apple tree that will eventually diffuse any wind from entering from the lower pastures. We have yet to enclose the back side of his barn, which is the direction from which the wind-driven snow and rain arrive. We may only get to putting up bales of horse hay or a tarp wall this year.

Last year, the Beekeeper [shameless and unsolicited plug: Rowan Beetanical Apiary, Creswell, OR, 541-942-6479] who keeps hives at the other end of our ranch gave us some of the honey, with which we made Mead (honey wine). Not being real fans of sweet wines, we fermented it down to a standstill, and the initial tasting proved it was going to be great. At four months, it's still technically "too young" to be tasted, but it seems to be losing the dryness a bit as it ages into the bottle. Impatient, we toasted Thanksgiving and Christmas with sips of our "Druid's Nectar." 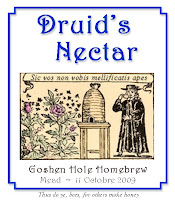 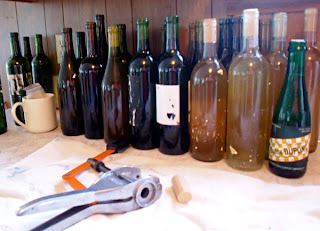 We just received a batch of this year's honey, which Jason says is a richer flavor than the first year, so when we get a breath we'll start the 2010 Mead. Most likely in the spring -- one of the hard parts of wine and beer-making here is keeping a room up to 70 degrees to keep fermentation going.

We also homebrewed two beers this year, a Porter that was quite good while it lasted, and a nearly-extinct "WWI Flying Ace pub" chewable brown ale called "Yorick Ale." We generally try to make a lighter beer for summer cooling off and a heavier winterbrau for winter settling in. We planted four varieties of hops last year which I hope are wintering over to be back in the spring: Willamette, Centennial, Goldings, and Mt. Hood. We know the Goldings didn't make it. The rest are all patent OSU clones.

Winter also brings the opportunity for more indoor activities. Even though there seems to be endless computer work to be done (basically we are still nerds, after all), delving into handcrafts is much more satisfying for us. Mike crafted a new niddy-noddy for Ann, and Ann is spinning more, and knitting and crocheting hats and scarves and such for sale in our farm store and at event booths. One client commissioned a dozen hats to be made of sari silk yarn combined with yarn from our herd, destined for a retreat group in Germany. 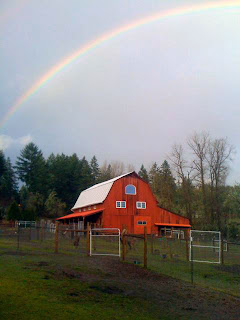 New Year's Day dawned with a rainbow of promise above the barn. May 2010 be happy and prosperous for us all!
Posted by Ann Dockendorf at 3:06 PM 5 comments: