On one of our first visits to an alpaca farm, we were standing in the pasture with the dams when they heard a coyote. The high-pitched, staccato alarm echoed through the group, all turning with necks and ears upright to face the direction of the danger. Immediately, the sentinel llama ran in the direction of the unseen marauder while the dams all ran in the opposite direction, circled up with the cria protected in the center, much like a wagon train under attack.

Alpacas make few sounds, and a 'herd alert' is generally used only for imminent danger. But some alpacas are more 'alert-y' than others. When we took our dog to a ranch that I had visited many times and kept her at a distance, Promise sounded the alert while the others quietly maintained a 'watch and wait' attitude. But as prey animals, it's always good to be cautious.

On a few occasions the distress signal has awakened us in the middle of the night. We jump up, pitch on jeans, jackets and shoes, grab the flashlights stationed by the door and head out to determine the cause. (We do not have livestock guardian dogs.) So far, we have only spotted the reflective eyes of deer meandering through our hay field on the way to the adjacent property. Before cross-fencing and critters moved in, this used to be their territory, too. 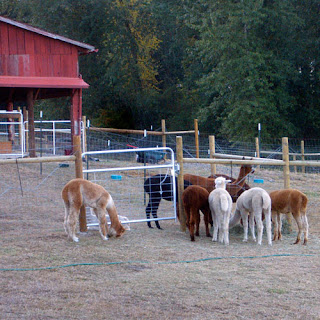 Last week during evening chores, as I exited Galileo's pen he sounded 'herd alert.' I looked all around and could spy no approaching danger. None of the other animals were on alert status, either by posture or sound. But Galileo was insistent and continued the shrill alarm.

Mike and I both looked all around and in the direction Galileo was facing. Finally we determined that the 'danger' he perceived was that the five yearling males in the pen next to the females, grazing along the same fenceline. As King of the Mountain, Galileo interpreted that as a strategic threat to his girls.

Shaking a dish of pellets, we enticed the boys back to their shed and closed them off from the neighboring pen. That was resolution enough for Galileo. He settled down and soon everyone went back to grazing. 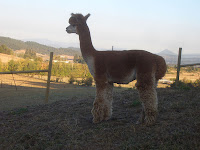 All the while, our other herdsire, Orion, stood erect in his pen with his back to the drama, as if to say "I am not a part of the problem, I am not challenging you." These intelligent animals have a specialized system of body language that we continue to learn.

In the wild of the Andes, a macho herdsire stands atop a hillock and surveys his herd. Galileo is definitely in his prime and behaving exactly as he should. It's the silly humans that created this frenzy with our lack of understanding. If it weren't for the enforcement of fences, Galileo would have chased the boys away himself. So it was our job to rectify the disorder we'd created and return calmness to the herd. 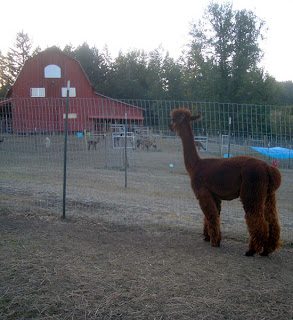 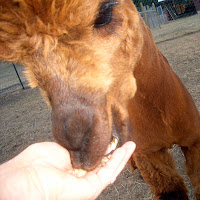 This herd alert was not quite the heart-pounding rush of a 2:00 a.m drill by search-light, but very solvable once we paid attention. The alpacas listen and watch; as their shepherds, we must listen and watch them.

Moments later, a relaxed Galileo was eating his pellets out of my hand, satisfied that 'his girls' were safe.
Posted by Ann Dockendorf at 8:26 AM 1 comment: 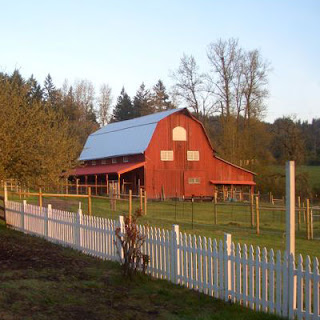 As a kid, I used to enjoy "playing house" — going to the store on my tricycle, cooking Tinkertoys for dinner, bathing the teddy bears and putting them to bed. So once when Mike came to find me puttering about in the barn, he innocently asked, "Whatcha doin' ?"

I paused for a moment, then replied with a smile, "Playing barn."

It seems such an apt term for the hum of delight that I feel at being able to work in this structure that is 108 years old (give or take a few), setting up my supplies, arranging the halters on a wrack that I built, watching the alpacas watch me as I move about their quarters. Like a giant jigsaw puzzle, every part of what I do is somehow connected to another part: raking poop, fluffing hay, weighing crias, halter-training, spit-testing. And on I hum... 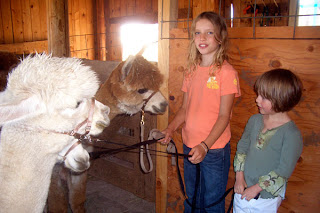 Whenever our granddaughters visit, they join right in the circle. The girls quickly learned 'gate ettiquette,' moving aside so the animals will proceed through without feeling threatened; and always closing a gate behind you. We haltered the yearlings and took them for a walk to a different pasture. And fed the big boys carrot treats. Alpacas and children seem to have a natural affinity. Perhaps its the playfulness and curiosity of both that makes them easy companions. 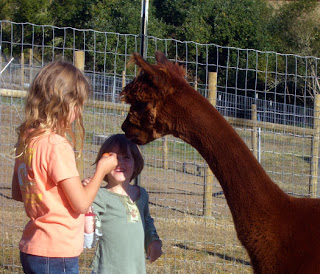 During their week here, Gwen was often out with the dams, just watching them, talking to the crias, or filling a water bucket. She went to horse camp this summer, and taught me a new knot. Sheba is on a 30-day penicillin regimen, and now I use the daisy knot when tying her to a fence post each morning for her shot. 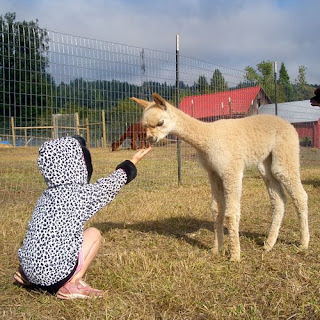 Annika discovered that if she gets down close to the ground, a curious cria will come near to check her out.

We also went to the Creswell Farmer's Market where our friend Elissa was spinning and selling some of her sheeps' fleece. For dinner that night we feasted on dusky brown 'Black Prince' heritage tomatoes and herbed goat cheese, and lots of crookneck squash with onions. 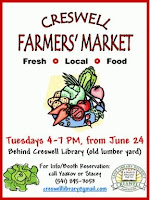 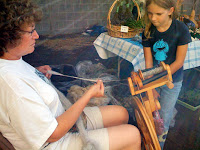 During these Indian summer days, I've been revisiting my garden plot, adding more lasagna layers to it so the decomposition will make it ready for planting next spring. Even throw-away fleece (too short/ dirty/ coarse) becomes a layer in the garden. The rest of the fleece has been sorted into projects: some destined for yarn from the mini-mill, some for felting into pet beds, some for the Alpaca Blanket Project with Pendleton, and some for my own hand-crafting and spinning. So many ideas, so little time!

Other family hand-crafting includes homebrewing beer. In April, Matt and Mike brewed an India pale ale and a Scotch red ale. This trip, Gwen assisted in the counter-top labeling process. (typing paper labels floated on a saucer of milk and placed on the bottle, excess blotted off) 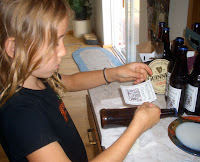