to Bend and Back Again

Hopi the llama has been a such good 'visual' for farm visitors to see the difference between the camelid cousins that I have wanted to get a suri to demonstrate the two types of alpacas, too. Suri fleece drapes from the animal's body in silky locks, rather than fluffing outward like the huacaya's crimpy fleece.

My good friend Cindy, of Hum Sweet Hum, and I made the trip to central Oregon (near Bend) on Thursday to pick up a suri dam and her young son. We are the proud new co-owners of Q'Inti, a multi-award winner before beginning her breeding career. Her name means "hummingbird" in Quechua (Peruvian Indian). 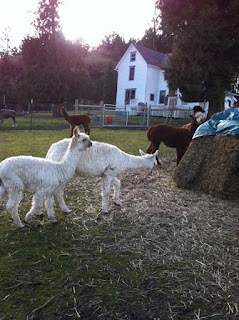 Although recently weaned, we rejoined dam and cria for the ride to their new home in the back of Cindy's Honda Element. To minimize stress, I have left them together for the first few days of adjustment to a new environment, new herd mates, new routines. The Kid is asking to nurse again, Q'Inti is stepping aside. No, no, no!

Soon I will reshuffle the groups so all 6 weanlings are in a pen by themselves, the Kindergarten class. Meanwhile, the Kid is getting to know Smuggler and Trinket and the others, and the dams are accepting Q'Inti. Bred to Cha'ska, another show-stopping suri, Q'Inti is due in June. 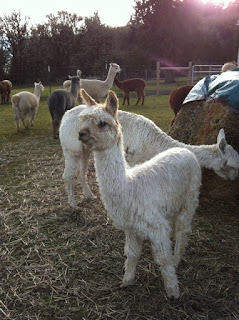 Now to come up with a suitable name for the Kid! He's our candidate for "Name the Cria" contest at ABC's upcoming booth at the Eugene Green Home & Garden Show next weekend.

Q'Inti and her current and coming offspring are all full Peruvian suris. Their fleece just shimmers. New spinning experiences await!
Posted by Ann Dockendorf at 9:00 PM No comments: 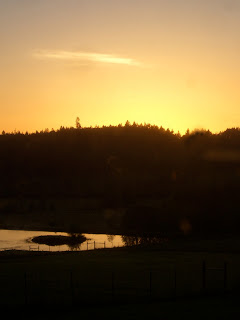 Winter Solstice was just three weeks ago, and already we notice the difference in length of daylight. Solstice is a welcome marker to the shift in natural rhythms -- and I inwardly celebrate passing it.

Besides the inevitable season of mud, winter brings foreshortened days and I am time-challenged by solo farm chores. But now we've rounded the bend, and darkness before 5:00 p.m. has stretched to dusk at 5:15. Wow, simple pleasures! A minute per day gain may not seem like much, but the affect is noticeable and welcome.

On my iGoogle home page I have a map that displays the dark/light phases across the globe. By observing these shifts through the seasons, it helps me to feel more connected with folks I know in other parts of the world: family in Southern California and Texas, friends in Michigan and Massachusetts, and wishful travelers to Ireland or Japan.

The continuous, inevitable shifting of daylight to darkness and back again is the earth breathing in-n-n-n-n and out-t-t-t-t, yoga-like. And the moon phases to and fro, accompanying the melody.

And so the seasons flow one into another.
Posted by Ann Dockendorf at 6:58 AM No comments: 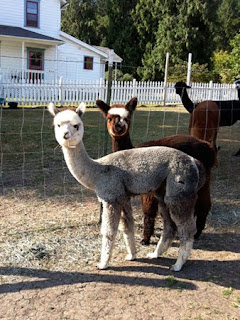 Our 2011 cria arrived in May and June, their births grouped together and timed so that they would grow and develop over the summer instead of during Oregon's sun-challenged fall and winter. However, that means that weaning at six or so months of age comes in the midst of winter.

Rather than segregating the young alpacas from the main herd, I chose to take their moms out and group them with newly pregnant dams. This way, I could continue to "feed 'em up" with extra calories. And the weanlings were well supported by remaining with their buddies and aunties.

Garamond and Tondero (photo taken in Sept) were the first two to wean over Thanksgiving weekend, when Mike was on hand to help me with sorting into feeding areas until they learned the new routine. I think Murphy Brown and Gracie missed their boys more than the boys missed them, even though both are experienced dams. But they soon got over it when they realized extra food was involved.

The next set of cria were old enough for transition on Christmas weekend. I checked the weather to make sure the nights were not too cold since they wouldn't have mom to cuddle with. Two of the nursing dams are rebred, so for the mom's health, it was important to separate the cria from them. Again, I moved the dams to the other group. 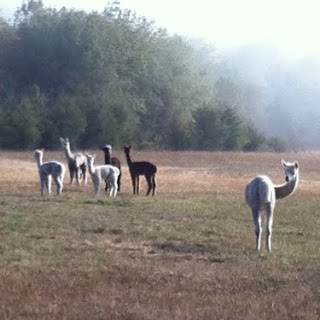 The moms and weanlings could visit over the fenceline for reassurance. For the first few days it was a challenge to urge Smuggler out into the pasture with the rest of the herd -- his buddy Trinket would call to him to come along. After a week of lagging, I decided to allow his mom, Jedlicka, back into the main herd. She is not pregnant so her health is not compromised. Jedlicka's presence had a calming affect on the other weanlings, and I have not observed Smuggler nursing any more. That's an unusual bonus.

Gradually I have shifted the two female herds from "main" and "young females" to "main" and "pregnant/weaned females" -- the feed 'em up group. Plus Blackberry, our lively 19-yr old who has lost a tooth. 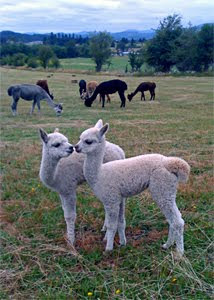 The weanlings continue to eat pellets in their kindergarten group at evening feeding. During their transition, I added probiotics to the bowls to alleviate any digestive stress. One of the most fun parts of my day is to spend some time in with them as they eat, and they are accustomed to my presence among them.

Trinket and Smuggler (unrelated)
are best friends, born a day apart.
Posted by Ann Dockendorf at 7:22 AM 1 comment: