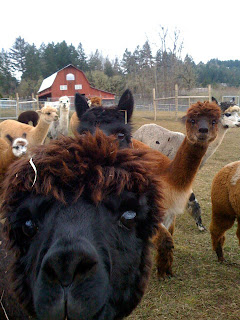 For an hour or so each afternoon, I have been letting the dams and crias (25 total) out into the hayfield. As soon as they see me heading toward the gate, they run ahead in anticipation. That's Sable, practically attached to my shoulder.

The young alpacas especially love to romp on the 10 acres, and sometimes the dams join in the pronking (boing... boing... boing, as if they're spring-loaded). Then they break into a full-out run, and sometimes do a side-kick that Mike fondly calls "crazy feet." 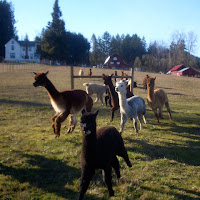 The hay field remains a perplexity to us. If we plant orchard grass (alpaca's hay of choice), at the most nutritious time in its growth cycle for mowing, the weather is too wet to cut it. And if we leave it to grow until the weather is dry enough, the plants flower and go to seed, draining the leaves of nutrition. So last year we planted horse blend (timothy, rye, orchard grass and one other), and it was indeed harvested when most of the grass and seed heads were dry.


Most of the 420 bales we sold -- folks just came and loaded up their trucks right in the field. We used some of them as a boundary for our garden, and I have built up layers of compost within it over the fall and winter months. (We can even hollow out places to plant trailing vegetables atop the bales.) And some bales we stacked in the barn as wind-breaks in stalls, and to be used as bedding on the concrete floor. A few of the alpacas choose to munch on it for diversion, but it offers very little food value for them. Granola, I call it, because it is just a crunchy snack. 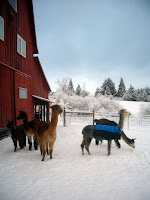 Weights and Measures
I started the year by getting a weight on each alpaca. Most do not mind being haltered and led to the scale, and some stand there more calmly than others. A few need patient coaxing, and two refused to budge, so I had to enlist help from a friend. Fabia is the most reluctant to be 'processed' for anything she considers unnecessary. But she also loves her carrots, so she was easily lead, unhaltered, to the scale and stood quite happily while munching on the dish of sliced carrots I held in front of her. I woulnd't mind if they all did it that way!

I do not spit-test the girls in winter months, because I would not breed them if they became open. We will test them again at end of March, hoping all pregnancies have held. The first four births are due in mid- to late June. Most of the other dams are due in Sept and October.

Since the winter sun is at such a low angle, we give Vitamin D paste to the crias bi-weekly. At end of day, while the adults are enjoying their pellets, the crias come into the creep feeder to eat unchallenged, so it is simple and safe to catch them there and give them a dose of 'orange sauce.'

Even though there are not as many chores to do for herd maintenance during the winter, the season brings on many more farm tasks. Mostly due to the weather and the latitude. In mid-December, I began afternoon regathering from the day pastures and feeding at 3;30 in order to be done by dark. 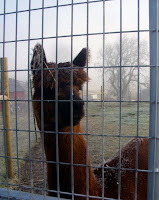 Once we passed Winter Solstice, the days began noticeably lengthening. Reading the Farmer's Almanac, I discovered that as days lengthen again, daylight extends about four times faster at the end of the day than at the beginning -- a fact of Nature I never realized when holding an office job!

Frost is Our Friend
The frost is often quite beautiful, caught cobweb-like in fuzzy ears or outlining leaves and grass blades. Mud and ice offer their own challenges. When the ground is so wet, the riding mower with trailer is unusable for poop scooping so we reverted to pushing wheelbarrow. A 4-wheel drive 'gator would be handy, but we haven't made that investment yet. And so far, we do not feel the need to get a tractor. 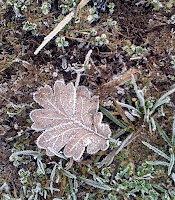 We put straw down on the pathways so they are less slippery. I did land on my tush one time and had to carefully sit sideways for a few weeks until the tail bone bruise healed. But we also discovered that frost is our friend. After driving a load of wood down to the workshop, the van kept spinning on the way back up the driveway. Early the next morning, the ground had frozen and Mike was able to drive it up just fine. I used the same technique to move the mower with trailer around for the next few mornings, and once again could take the load down to fertilize the hayfield. 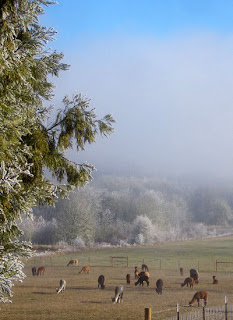 Posted by Ann Dockendorf at 9:39 AM 3 comments: