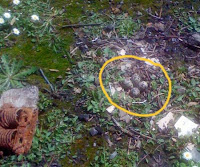 They are still here, in fact.
*Poetic license taken for the grammatical lapse.

In the pasture behind the house, I noticed a few of the alpacas peering at something in the former burn pile. I got the binoculars and saw it was a bird flapping on the ground. Quickly, I moved the dams into the adjacent pasture and closed the gate, then went over to investigate. I found a ring of rocks with an egg in it. After about 15 minutes, the bird returned.

Before letting the girls into that pasture the next day, I checked again, and there were 2 eggs. Guess they hadn't scared the bird off after all. A couple of days later, there were 4 eggs. I placed a rusted coil nearby so I could sight it more easily from the porch.

By the brown and white striped markings, I identified the birds as Killdeer and researched them online. But I could not find any information on how long they incubate the eggs before hatching. So I emailed the president of a local birding group (an ornithology instructor at the University of Oregon) with my main question: How much time am I investing in keeping my herd out of this sizable pasture? 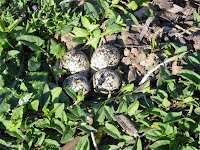 His response was quite informative:

Killdeer almost invariably lay 4 eggs and usually 1 egg per day. Two-day laying intervals are very rare, as are 5 eggs, so you can safely assume that the complete clutch was laid over a four-day period. Once the final egg is laid, the adults will begin incubating so that the eggs will all develop at the same rate and hatch on the same day, frequently in the same hour.

The incubation period is somewhat variable and is affected by the outside temperatures. Right now we are not having any extreme weather so I would expect a normal incubation period of 22-28 days. Longer incubation periods have been reported but are rare.
If you saw one egg 2 weeks ago (14 days?), then the birds have likely been incubating for ~10 days which means that they have another 10-18 days before hatching. Both parents will share incubation duties and assist the young after they have hatched.

So this Friday (May 22) will mark 22 days of incubation, and hopefully hatching. I am not clear how long they will be nestlings, but since they are "precocial" they will be able to see and walk immediately. There's even a YouTube video of a similar nest. 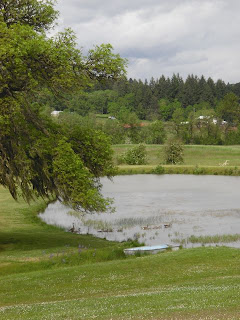 The alpacas look across the fence at the parent birds, no doubt wondering why they are kept out of the pasture with all of the tasty grass. I put our herdsire Galileo in there for the day a few times and he grazes without bothering the nest. The girls would be rolling in the adjacent dirt, but he doesn't do that.

At our neighbor's pond on the other side of the fence, there are 2 sets of Canada geese goslings. One group of 7 evidently hatched in our pasture (I never found the nest) and, with their parents, spent their first day marching up and down the fenceline, looking for a way to get to the water. Even though the adults could easily fly to it, they remained grounded with their fuzzy offspring.

We opened the gate to the hayfield for them, and they toddled over to a gap in the fence and made their way to the pond. Both parents care for the young until they can fly.

All of these feathered babies are a prelude to 3 cria due in early June. Windancer, Disa and Fabia look especially large after shearing. I feed them rice bran pellets (for calories) along with their regular daily mineral pellets, so they will not be too drained of resources this last month, and to give them a good start towards lactation. 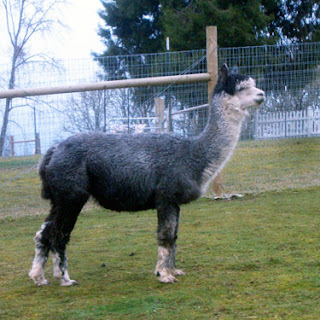 Our stately gray Fabia is 15 years old, and this will be her 10th cria (her first for us). She is strong and healthy, and births easily. This photo was taken a few days before shearing.

The 3 most pregnant dams were 6 wks away from delivery, and I chose to shear them. It's is a judgment call whether the stress of shearing might cause premature delivery, or the stress of over-heating if they are not shorn and the weather turns hot. I gave these three dams Rescue Remedy to calm them, and they were sheared first and quickly. They exhibited no problems; I was glad I made that choice.

A final sign of spring is that the bee hives have arrived. They are placed at the far end of the hayfield, across a seasonal stream. What a surprise to see the patchwork of colors this year! The beekeeper tells me that bees forage for nectar up to 3 miles, so they enjoy the fruit trees, willows and garden plants in this rural area. And we have a gallon of honey from last year's harvest, and a recipe for mead! 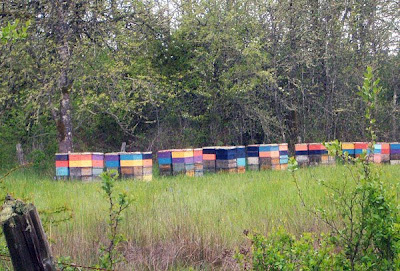